Four times malignant growths returned to Amit Gal Alon’s body and each time he confronted and defeated them.
As a result of the willpower which he discovered in himself, he developed a unique system in the field of the Anatomy of Motion and strength training. He decided that this would be his mission in life.

From childhood, Amit Gal Alon was very active and participated in nearly every existing type of sport. Movement was an essential part of his life. During high school, and while in the army, he played volley ball intensively. In 1995, during his service in the Israel Defense Forces, a moment occurred which he will never forget – he was told he had a tumor in his head. It was as if the world stood still. Suddenly, everything took on new meaning and he began to ask questions about life.

The Long Battle with Cancer.

Cancer is never simple, nor forgiving, and Amit’s battle was no different; especially given that during the next ten years the illness would return three more times.

Amit received the standard treatments available then: chemotherapy and radiation. He suffered terribly from the physical side effects of vomiting, weight loss, and difficulty eating; not to mention the emotional/mental side effects including nightmares. During the long period of intense treatments he was unable to eat, much less, exercise.
He was so weak that even the simplest motion of lifting his arms above his head became a task too difficult to perform. He could hardly move his body and as a result lost 15 kilos of muscle.

However, Amit Gal Alon is a man of movement and determination. During rehabilitation between chemotherapy treatments he had to gain back the muscle that he lost and the ability to execute the simple movements he could not do alone. Exercise became not just a means to an end, but rather a lifeline thrown to him. Amit chose to work out in a neighborhood gym rather than at home to allow himself the aide of the machines. And, more importantly for him, the gym left little time to dwell on depressing thoughts; his sole aim was to focus on which muscles to strengthen next and how to rebuild his body, not thinking about anything else. The exercise regimen built up his appetite and improved his mental outlook.

Looking to Help Others

After the treatments the tumor disappeared and Amit registered to study physical education in college. The connection between the body during illness and the study of movement helped him recover and survive that difficult period. He decided that he wanted to make it his profession to help others connect with their body through movement.

However, at the end of his first year in college, he began to suffer from headaches, dizziness and imbalance. One morning while shaving, he noticed in the mirror that the left side of his face was not functioning. Hospital tests revealed that the previous tumor had left metastases in his inner ear, adjacent to his brain. It was imperative to remove part of the tumor in an operation. Doctors spoke with him about the survival rate of the delicate operation. This was the first time that he began to think in terms of life and death.

Thankfully, the operation was a success. Two of the four centimeter mass had been removed. The remaining two centimeters left next to his brain were to be overcome by treatments. For more than six months he underwent a new round of chemotherapy and radiotherapy treatments. All of the side effects came back: weight loss, vomiting and difficulty eating. During this time, though, he never stopped exercising.

Finding an Outlet Through Art, and Finding Inspiration

Amit was in one of the most difficult periods of his life. Exercising between the rounds of treatments helped immensely; however, he also needed something for his soul. So he purchased paints and threw them freely on the canvas with his hands. He discovered that this expression through art increased his overall well-being, thus, he began painting.

The free-hand painting led him to a new and exciting interest: digital graphic art. Upon completion of his studies in college he immediately enrolled for an additional degree in graphic art. As soon as Amit began to study graphic art he discovered his hidden talent. He began to create and to specialize in the field of three dimensional graphics. He was attracted to drawing anatomy and was especially drawn to the movement systems in the human body. The age of the internet was just beginning. Amit designed and built the first site in Israel dedicated to physical fitness. This was like rehab for him. It gave him satisfaction to help and share his knowledge to others. Digital design together with physical strength training helped him to shut out his dark thoughts.

A Third Round of Cancer

In 2001, four years after the second battle with cancer, it returned for a third time. Now they discovered metastasis in the sinuses. The all too familiar script repeated itself again. Unlike the previous two times, however, this period was relatively easy. He was able to continue with almost all of his heavy workload and did not slow down. Even during treatments in the hospital he would arrive with his lap-top and continue his work.

During his third illness, Amit worked as a teacher of anatomy and kinesiology for physical education coaches. It was here that the idea for what would eventually become the Muscle&Motion software was conceived. He realized the disconnection his students faced when understanding how the body moves. While the textbooks and illustrations of the muscular system did provide comprehension of the beginning and ending for each muscle, many students struggled envisioning how the muscle worked when it contracts and extends.

The Beginnings of 3D Muscular Animation

Amit decided to create a system which could improve his students’ knowledge of muscular movement. Combining his own knowledge of anatomy with his talent for digital art, he began to work day and night on a visual system that would animate the body in motion. Up until then, there were only two books that illustrated body movement with two-dimensional pictures. His new passion drove him to work all night bringing those drawings to life. He himself was surprised at the complex ability of the body to stabilize and move itself. Amit was enamored with his creation. When he presented it to his students and received an overwhelming positive response he felt a deep need to continue and create his life’s work. He felt that he had survived for a purpose.

In 2004, Amit published a Study Resource on CD-ROM dealing with anatomy of movement and anatomy of exercises. Many students and trainers in Israel took advantage of this new tool and their feedback was very enthusiastic. This encouraged him to continue developing his revolutionary resource to make it available worldwide.

Determination in the Face of Illness

Nonetheless, his personal confrontation with illness was not over. Two years later, Amit was notified that the tumor had returned this time to his neck. Yet, with this fourth encounter he received a gift: only an operation was needed. However, the recovery from the operation was not easy as a nerve in his neck had been injured making him unable to lift up his right arm. Undeterred, he decided to rehabilitate himself by swimming. Also, as Amit lived near the sea he bought a surfboard and began to surf. The paddling helped him rehabilitate the nerve and within a month the hand resumed almost full function.

Throughout this new period of rehab Amit continued to create and build his learning tool for visualizing human movement.

“Each illness just strengthened my inner resolve that I am still here in order to give to the world through my talents and abilities to represent our complex body in a simple and enjoyable manner”, Amit shared. “During the last four years technologies have improved allowing me to enhance the animations and raise the quality of the videos.”

Thus, he decided to publish his creation for the whole world. Throughout its years of development, he set an aim and stuck to it. While not easy, his internal motivation to give back was, and is, very strong. In 2010, Amit connected a visual internet system with his creation of Anatomy of Movement software in addition to the Anatomy of Strength Training. Athletes, fitness enthusiasts and trainers around the world use the videos and their feedback is tremendous.

The many responses Amit receives from across the globe of how the Muscle&Motion animations are benefitting them give him strength to continue to create and enhance his video library for people’s benefit. He is so grateful to be here and for the opportunity to give to the world. His satisfaction from the love and replies of his customers is wonderful.

“It doesn’t matter whether we live or die, but how we live.”
Amit is fulfilled as long as he can to give from himself to others. 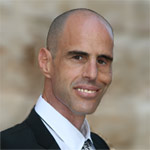